You are here: Home1 / About Us

Holly and I met while pursuing our undergraduate degrees, she in education, I in psychology. We married a few years out of college. Later I returned to school and received my masters degree in education. We both feel that our chosen fields of study have been invaluable in this, our latest endeavor.

When we began planning a family, Holly started thinking about exchanging her teaching career to one that would allow her more time at home with her children. A search for someone to teach her the art and technique that she needed in her new profession led Holly to Bernice.

Bernice had been a successful business woman for many years when Holly first contacted her. She became Holly’s teacher and mentor. That relationship was the beginning of a special bond between Holly and Bernice. After learning from Bernice, Holly started a business practice that is still thriving thirty years later.

Several years later we were busy raising three daughters. Bernice had retired and moved from her North Side apartment overlooking Lake Michigan to a condominium in Chicago’s western suburbs. Holly made it a point to keep in touch, knowing that Bernice had no family and very few friends. It was not always easy. A 45-minute drive through the outskirts of a busy city separated them. They regularly spoke , and Bernice was always invited to spend holidays with our family. Early in her retirement she sometimes did.

As time went on Bernice began isolating herself more and more. Her organizational skills, her obvious intelligence, and her social charms allowed her to hide her declining condition. Eventually, however, it became obvious to Holly that she was losing her ability to function.
Bernice’s pride and joy

At ninety years old, she was still driving her favorite possession, a 1964 white Chevy Bel Air that she bought when it was new. (She still talks about that car) Holly once met her at the doctor’s office and followed her home. By the time they got to Bernice’s home, Holly was a nervous wreck. She was amazed and thankful that Bernice hadn’t caused an accident, and convinced there must have been an angel riding with Bernice.

The “angel is my copilot” incident was just one of many that led Holly to suspect that Bernice was a victim of dementia. She was eventually diagnosed with probable Alzheimer’s disease.

Our kids were now grown and out of the house. Holly and I had more time on our hands, more time we could devote to Bernice, and Bernice needed just that. Unfortunately, neither Holly or I knew much about Alzheimer’s disease, but Holly jumped in with both feet, researching doctors and facilities, as well as the disease itself. It was not easy, but she finally got Bernice settled in the best Alzheimer’s care facility she could find. 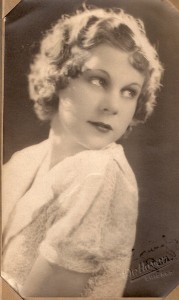 Bernice as a young woman.

It was more than seven years between the time Holly first realized that something was wrong, and she finally got Bernice into long term care. In that time, she learned much more about dementia and Alzheimer’s disease. Medical theories and research; best practices for the care of people with the disease; medicines and drugs that do little and often have serious side effects, and the downward spiral of cognition and abilities that she not only read about but experienced as the disease took a stronger hold of Bernice; all these things became a constant part of Holly’s life. Like the millions of other people that are affected by the disease, the Bernice that Holly knew was not coming back. But there is a Bernice still here. There is a living person with thoughts and feelings and needs. What about her?

By this time, I was thoroughly invested in Bernice. Having listened for years to Holly’s stories, I couldn’t help but be. Out of curiosity as much as anything, I started researching the professional publications and the Websites of the various associations and societies around the world. I had done a lot of this kind of research when I studied psychology in college, and was good at it. As I read, two frightening facts stood out: there is no cure for Alzheimer’s disease, and it is always terminal.

Since high school, I have been interested in the Eastern philosophies and religions. An understanding of that way of thinking led me to realize that the word “life” could replace the phrase “Alzheimer’s disease”: “There is no cure for life, and it is always terminal.” But knowing that is a good thing. Without that knowledge, we would be completely unmotivated to improve ourselves. “There’s always tomorrow, there will be time to do that later.” Knowing that we will not be here forever doesn’t stop us from living, it inspires us to live. We should not proclaim these unfortunate people dead the moment after we diagnose them as “Alzheimer’s victims”. They still have life ahead of them, life that can be productive, enjoyable, and rewarding.

Something else began to surface from my reading. Amidst the reports of failed clinical tests, of unrealized hopes for this treatment or that potential cure, of staggering predictions of a coming Alzheimer’s epidemic, was a growing concern for the individual. Many researchers and caregivers were calling for a more humane standard of care for people with dementia. Many healthcare professionals were advocating treating the patient, not just the disease. I realized that this is exactly how Holly, intuitively, had been treating Bernice.

At the same time, Holly was becoming frustrated by the lack of resources available to her as a caregiver. Because of her teaching background she was constantly looking for appropriate activities; games, toys, anything that would interest Bernice and hold her attention. She wanted Bernice’s quality of life to be all that it could be, and she knew that keeping her active and involved for as long as possible was the best way to do this.

It was difficult to find activities for people with dementia. One day she said to me, “I think that a store that sells toys and games for people with Alzheimer’s is really needed.” I said, “Yes, probably.” (I’m sure I had other things on my mind at the time.) But we did throw the idea around for the next few months, and I extended my research to include a feasibility study. The more I thought about it, the more the idea appealed to me, so I jumped in with Holly. 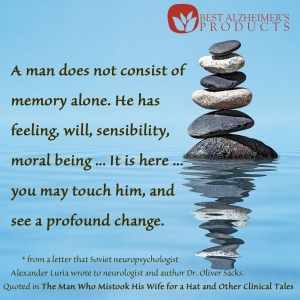 Partly from this insight we derived our mission. Understanding that people who are somehow compromised by dementia can still be reached and can still lead meaningful lives will improve the quality of care.

As I continued my reading and investigations with renewed vigor, I ran across an article in a professional journal. It contained a quotation from a letter that Soviet neuropsychologist Alexander Luria wrote to neurologist and author Dr. Oliver Sacks. A variation of this quote is one of the first things you see on the Best Alzheimer’s Products website:

People do not consist of memory alone. They have feeling, will, sensibility, moral being. It is here that you may touch them, and see a profound change.

This quote effected me deeply. I knew it was what Holly knew and acted upon instinctively when she was with Bernice, and the people with whom Bernice now lives. I shared this quote with her, and she said, “Yes.” Not because she had other things on her mind, but because she already knew.

Our journey, this little observation by Dr. Luria, and our relationship with Bernice gave us our Mission:

At Best Alzheimer’s Products, we are striving to make life better for people living with Alzheimer’s disease and other forms of dementia.

Learning to communicate with and care for our loved ones who happen to be affected by this terrible disease we may ourselves learn to live more in the moment, and we will be better for that.