LIGHT THERAPY FOR ALZHEIMER’S DISEASE WAS ORIGINALLY PUBLISHED BY JOHN SCHMID ON JULY 02, 2009

Simple But Effective Therapy for Symptoms of Dementia

Sometimes simple is better. A good example is light therapy for Alzheimer’s disease sleep disorders. The part of the brain that controls our wake-sleep cycle is the suprachiasmatic nucleus. That cycle can sometimes get out of whack. Jet-lag is an example of that, and how we feel when it happens. Jet-lag is quickly corrected by the day-night cycle of our new time zone.

Dementia can damage the suprachiasmatic nucleus, resulting in the sleep disorders that are often associated with a disease like Alzheimer’s. A good therapy light can help restore a more natural sleep pattern.

The product of reminiscence activity can benefit a family for generations to come. Reminiscence therapy is a proven way to reinforce the self-image of seniors whether they have dementia or not, one that improves quality of life. More than that, the result of reminiscing as a family can become an heirloom; a memory or even a recording of a conversation, for instance, that becomes a part of a families legacy.

Doctors too  often prescribe medicine for sleep disorders. Drugs  sometimes help, but there is a cost. But people with dementia are often over-medicated to begin with. Prescribing more medicine increases the likelihood of drug interactions, and sleep medicines often cause other problems. The Alzheimer’s Association makes this recommendation:

The risks of sleep-inducing medications for older people who are cognitively impaired are considerable. They include increased risk for falls and fractures, confusion, and a decline in the ability to care for oneself. If you find it necessary to use sleep medications, discontinue them after a regular sleep pattern has been re-established.

It’s about the rhythms…

Most people function on a wake-sleep cycle that corresponds to our 24 hour day. The mechanism that controls that cycle is known as circadian rhythms. Anyone can have that cycle interfered with, resulting in sleep disturbances that are usually very temporary. Jet-lag is a good example of  an event that can cause such a disruption; one that many of us have experienced. Getting over jet-lag is usually just a matter of letting your brain adjust to the new time zone. The day-night cycle is mostly responsible for that adjustment, responsible for resetting your circadian rhythms.[pullquote]The risks of sleep-inducing medications for older people who are cognitively impaired are considerable. [/pullquote]

Sleep disorders are often associated with Alzheimer’s disease. Insomnia and the related daytime sleepiness are two symptoms that a person with Alzheimer’s often experiences. Sundowning is another. Sundowning is an increased agitation that occurs in the evening and is often accompanied by wandering.  Sleep disorders of this type are not a minor problem. It imposes an added burden on a care-partners already difficult position, and wandering can be dangerous and even fatal. Unfortunately, the disruption in the circadian rhythms of a person who has Alzheimer’s disease is not as easy to fix as jet-lag. It doesn’t result from a vacation or business trip, but from brain damage caused by the disease.

Circadian Rhythms and the Suprachiasmatic Nucleus 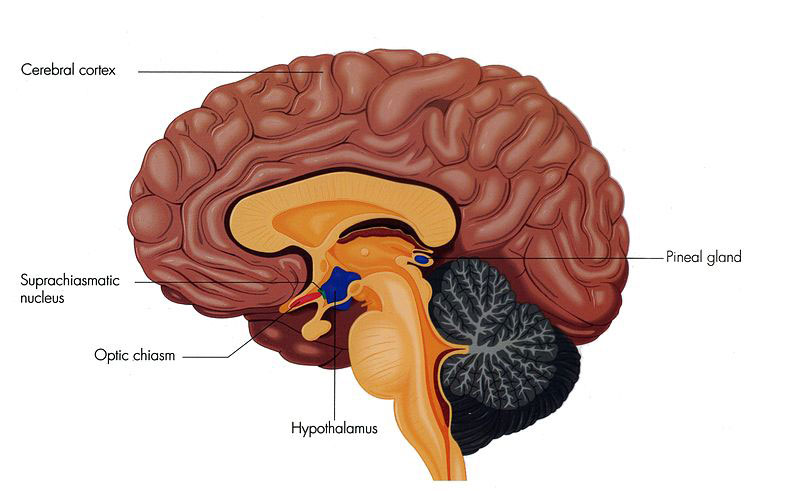 The suprachiasmatic nucleus is responsible for regulating our circadian rhythms.

The suprachiasmatic nucleus (SCN) is the part of the brain that controls circadian rhythms. The SCN is located within the hypothalamus, in the base of the brain.  (Read more about the brain>>) Researchers at the Netherlands Institute for Brain Research found a marked decrease in the total cell mass of the suprachiasmatic nucleus in older people (80 to 100 years), and an even more pronounced reduction in people with Alzheimer’s disease (mean age 78). This shrinkage could account for the sleep disorders that many people experience as they age (waking in the night or too early in the morning, daytime napping, etc.). These and other disorders common in the elderly are more common and more pronounced in people with Alzheimer’s disease and many related forms of dementia.

There is a direct neural connection between the eye and the suprachiasmatic nucleus. The light-dark cycle controls our circadian rythms, and light can be used to reset those rhythms when they get out of kilter. The use of light therapy for Alzheimer’s disease can help lessen the sleep disorders that can be so much a part of that and other types of dementia.

One of the characteristics that a circadian rhythm must have to be considered genuine is that it can be reset by an external stimulus. Each day the light/dark cycle and other environmental stimuli help maintain the rhythm so that it stays synchronous with the 24-hour day. If, however, the suprachiasmatic nucleus is destroyed completely, the sleep/awake cycle will be totally disrupted.

This inexpensive by effective therapy light is available on our store.

We should expect, then, that partial damage to the suprachiasmatic nucleus will effect sleeping patterns, not completely but to some extent. This expectation is in agreement with the clinical findings: People with Alzheimer’s disease and with other types of dementia that result in shrinkage to that part of the brain suffer more sleep disorders than otherwise healthy people of the same age.

An increasing amount of evidence shows that bright, full spectrum light, on the magnitude of 5000 LUX to 10,000 LUX, can reset the circadian rhythm in people suffering from Alzheimer’s. Daily exposure to this type of light helps dementia patients with sleep disorders sleep longer and spend more time in deep sleep. As an added benefit, cognitive deterioration slowed with regular exposure to bright light, and symptoms of depression decreased.

Natural sunlight is the best light therapy for Alzheimer’s or anyone else whose sleep cycle may be off. However, sufficient exposure to sunlight is not always possible. This is especially true in cold, winter months, and for people with limited mobility, and limited access to the outdoors. A therapy light that meets the requirements (full-spectrum, 10,000 LUX, etc.) is a suitable substitute.

Burns and Byrne, in a study reported in the British Medical Journal, found that dementia patients who sat in front of a bright (10 000 lux) light for two hours each morning slept an average of 40 minutes longer, and slept more deeply, than usual. A control group who sat in front of a one hundred lux light slept only about 8 minutes longer. This tendency was not evident during the summer, but the findings can be instructive for the long dark months of winter

A Dutch group reported in the June 11, 2008 issue of JAMA that bright light therapy “ameliorated symptoms of disturbed cognition, mood, behavior, functional abilities, and sleep.”  The study was defined to investigate the combined effect of bright light therapy combined with melatonin. Based on the study the researchers conclude that:

…the simple measure of increasing the illumination level in group care facilities ameliorated symptoms of disturbed cognition, mood, behavior, functional abilities, and sleep. Melatonin improved sleep, but its long-term use by elderly individuals can only be recommended in combination with light to suppress adverse effects on mood. The long-term application of whole-day bright light did not have adverse effects, on the contrary, and could be considered for use in care facilities for elderly individuals with dementia.

2 comment(s) need to be approved.
14 replies

A trained music therapist will create a context in which all the benefits of music therapy are possible, but knowing a little about why music is such a potent tool can help you create a therapeutic environment that includes music.

We gather sensory information about our world with our noses as well as through our eyes and our ears. We taste with special nerve endings on our tongues, and other nerves allow us to feel with almost every part of our bodies. But it is the brain that processes those sensations. Sensory stimulation is brain stimulation.
Scroll to top