THE ALZHEIMER’S PROJECT is a presentation of HBO Documentary Films and the National Institute on Aging at the National Institutes of Health in association with the Alzheimer’s Association®, Fidelity® Charitable Gift Fund, and Geoffrey Beene Gives Back® Alzheimer’s Initiative. The series’ producer is John Hoffman; the executive producers are Sheila Nevins and Maria Shriver.

The Memory Loss Tapes, just one part of The Alzheimer’s Project, was aired on HBO several years ago. Because of the time that has passed and the fact that many people don’t have access to HBO programming, I thought it would be worth making the entire Memory Loss Tapes video available here.  (Since this post first appeared, HBO has disallowed viewing of The Memory Tapes without a paid HBO account. There is enough content here that I have decided to keep the post available, but without the video itself. If you have an HBO account you can stream this and other films of The Alzheimer’s Project here. I am not advocating for HBO and do not expect you to sign up with HBO just for this reason.)

The Memory Loss Tapes  can, at times, be difficult to sit through. At other times I couldn’t help but smile and even laugh while watching. For example, Woody (the beginning of the second part) singing with his old acapella group, The Grunions, brought a tear of joy, as did other segments. 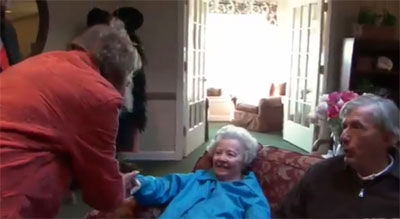 On the other hand, watching Yolanda (31:15 of the first part) trying to get away from the snakes she was hallucinating almost made me cry in sympathy. If you are in any way connected to a person who has dementia you are used to emotional roller coasters. You will probably identify closely with some of these stories, and yet others will likely be unfamiliar. People are all different, and that includes people who have Alzheimer’s disease.

At 37:40 of the first part of the film Yolanda’s son comes to visit her at the community in which she lives.  At dinner, he introduces himself to his mother: “I’m your son, Roberto.”  This is good. Someone with Alzheimer’s disease often don’t recognize people who have been in their lives for years, but a simple re-introduction like that can trigger a necessary switch so the connection can be made, or reassure the individual that it is alright for you to be there. In this case it seems it was the latter; Yolanda didn’t believe it was her son sitting with her.

She might not recognize him at all, but thinking it is someone she should know because of the situation, she introduces him to others as “her very dear friend.” Well, OK. At least the two of them can base a visit on that. But Roberto insists: “I’m your son, you know that.” Not a good thing to say, but perfectly natural and completely understandable. I don’t fault Roberto for his response. Almost anyone in that situation would respond similarly.

I do fault the personnel at the community for not preparing Roberto a little better. The process of moving someone who has dementia into a care community should include an orientation for family members and others who come to visit. Just a little knowledge about the effects of the disease and the resulting behavioral changes goes a long way to make a visit more enjoyable and more productive. It was good to see Roberto bring out some old family photographs. Alzheimer’s disease is funny in that older memories often stick around longer than memories of more recent things. The pictures are from a time that Yolanda remembers; in fact, she is probably more familiar with then than she is of yesterday. She doesn’t recognize her son, because her best memories of him are when he was little.

What do you like about this film from The Alzheimer’s Project? What don’t you like? Did you see anything you don’t understand? Leave a comment for the community!

More at The Alzheimer’s Project

Watch the above film when you have time. The Memory Loss Tapes are only part of the Alzheimer’s project, so visit the site to learn more. Also at The Alzheimer’s Project:

Can We Remember Lost Memories