As Alzheimer’s disease progresses, one of the most difficult jobs caregivers have is keeping their patients and loved ones engaged with the world around them.

Alzheimer’s can be a very lonely disease. As patients begin to forget days, faces, and even treasured family members, it can be difficult for a person suffering from dementia to interact with the world in the same ways they used to. To that end, caretakers make sure their charges have plenty of activities.

What is an Alzheimer’s-friendly “activity”?

In the world of Alzheimer’s research and care, an “activity” can be a wide range of things. Depending on the Alzheimer’s patient’s age and stage of disease progression, some activities can be wildly effective in their treatment, even if we wouldn’t normally think of them as such.

However, it’s important to note that activities should be appropriate for the person’s age and the progression (or stage) of their disease. Someone with late-stage Alzheimer’s disease may not be able to handle a difficult memory, while someone with only mild symptoms could be insulted at the suggestion to play with dolls.

For Alzheimer’s patients, it is critical to stay active. From exercise to memory games, chore routines to taking care of a dog or cat, keeping busy keeps the brain moving. It also keeps away the “four A’s of Alzheimer’s” (anxiety, aggression, agitation, and apathy).

What are ways for someone with Alzheimer’s to stay active? 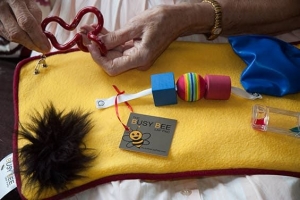 The Busy Bee Lap Pad is a perfect way for people with late-stage Alzheimer’s to stay active.

Alzheimer’s patients can benefit from a wide range of activity. When we say “activity,” we don’t just mean exercise. (Although exercise has plenty of wonderful health benefits at any age and stage.)

Traditionally, caregivers rely on things like games, puzzles, and toys that act as both sensory stimulants and memory tools. Toys like the Busy Bee Lap Pad combine activity and comfort. This activity tool is made from a soft fleece weighted lap pad, with a variety of stimulating attachments like lamb’s wool, a bean bag, and movable wooden beads. These types of tools are perfect for people with late-stage Alzheimer’s, because they offer all the comfort of a weighted blanket with the stimulation of traditional fidget toys.

Today, as more and more specialized products hit the market, there are a wide range of high-tech and customized products designed especially for people with Alzheimer’s.

Video games, for example, may offer surprising benefits for cognition and memory improvement. Researchers go back and forth on the benefits and drawbacks of video games, but recent studies show that certain games — especially ones designed to improve memory and brain function — can have an impressive impact on adults approaching older age, not just adults with Alzheimer’s disease.

According to a 2015 study run in the United Kingdom, “Playing online games that exercise reasoning and memory skills could have major benefits for older people.” Through a study of more than 7,000 people, researchers at King’s College London discovered that the mental exercises available in these types of video games resulted in significant improvements on aptitude tests (in cognitive and life skills) given before and after a six-month period with access to the games.

“After six months, the over-60s who took part in the brain training were found to have significant improvements in carrying out daily tasks, while those over the age of 50 recorded better reasoning and verbal learning,” noted the Telegraph. “The improvements were most effective when people played brain-training games at least five times a week.”

Video games can do more than reduce Alzheimer’s symptoms — they may be able to help diagnose or prevent early Alzheimer’s.

In April 2019, researchers at The French National Center for Scientific Research (CNRS), in conjunction with teams at University College London and the University of East Anglia, published a study related to a game developed specifically for Alzheimer’s research.

CNRS researcher Antoine Coutrot developed the game Sea Hero Quest as a way to test players for the earliest indications of Alzheimer’s disease. Based on research data from more than four million players, Coutrot drew parallels between spatial awareness in the game (navigating maps, approaching quests, and solving problems) and in the real world (navigating city systems, using a cell phone).

Similar studies have shown a link between video games and increasing cognitive ability in older adults. A study from the University of Montreal tested the impact of video games on grey matter in the hippocampus–the part of the brain that promotes memory building.

As a result of the study, researchers concluded that 3D video games can increase grey matter in the brain, improving memory and cognition, and potentially reducing the risk of diseases like Alzheimer’s.

As Alzheimer’s research improves, products and activities continue to evolve.

The takeaway from these studies is that activity is good for the brain–and some activities can be better than others.

Depending on the stage of Alzheimer’s, video games, memory games, and other brain games have an impressive impact on memory and cognition. In later stages, however, these games and activities may be too complicated for someone with dementia to understand. In the end, it’s important to focus on the things that keep your loved one comfortable. When they’re having fun, and when their brains are working hard, you’ll find the positive impacts astounding.