It’s the same and it’s not

Never stop communicating. As Alzheimer’s disease progresses it slowly erodes one’s ability to communicate verbally. One of the classic symptoms of Alzheimer’s is the difficulty in ‘finding the right word’ during a conversation. Another common difficulty is structuring a logically sequenced sentence. These impairments are frustrating as you can imagine, and likely have seen. Communicating with Alzheimer’s is difficult, but don’t stop trying. Even more frustrating for the person with Alzheimer’s than the difficulty he is experiencing making his thoughts known to you is the thought that you have given up trying, or don’t want to communicate with him.

Communicating With Alzheimer’s is the Same and it’s Different

This might seem contradictory at best. Yes, there are some skills that will greatly improve how well you communicate with a person who has dementia, but every one of the suggestions below will increase the effectiveness of your communication regardless of to whom you are speaking. It’s just that we don’t always take the time or make the effort to be truly in a conversation.

Here is a short list of some common communication difficulties caused by dementia:

There are many others, but these are some that you are most likely to see.

Suggestions for improving communication with Alzheimer’s

Be Sincere. As do children, people with Alzheimer’s disease have a way of knowing intuitively whether or not someone is being honest with them. They will often demand honesty from you, verbally or otherwise, and this is often interpreted by caregivers and family members as agitation. This honesty does not require that you always be completely truthful and factual. (Read more about the reality of  someone who has Alzheimer’s disease.)  This honesty is emotional sincerity, communicating in the moment.
Bernice was enjoying looking through her book of Fifties Sears Fashions, showing Holly the dresses she had ordered, and even the ones she had designed. (Bernice did work for Sears in the sixties giving sewing seminars to women all over the country.)[pullquote]…the person with dementia is often beyond remembering how to connect with others and can only relate as she is, here and now. Bridging a connection is up to me, up to us.
~ Nancy Pearce    Inside Alzheimer’s[/pullquote] Suddenly, she looked at Holly, and with a real concern said, “I haven’t seen my mother today!” Holly simply said, “I’m sure she’s all right.” Bernice went back to her book, a potential mini-crisis averted.

This incident happened about the time that Bernice was entering the later stages of Alzheimer’s, and does not so much illustrate sincerity as it does judgment. Total honesty would require Holly to tell Bernice that her mother was dead. No matter how she said it, “Your mother died a long time ago, Bernice,” or “Your mother is dead, Bernice, you know that,” would have upset Bernice and caused her to repeat a mourning process that she suffered many years ago. Unnecessarily. And the whole process would be repeated the next time she asked about her mother.

Keep a Sense of Humor. Laughter may not always be the best medicine, as the adage suggests, but it is a very effective one, and the side effects are all good. A person often retains her sense of humor after dementia has robbed her of many memories and other cognitive abilities. The limbic system is responsible for emotional memories, and this part of the brain remains relatively functional when other cognitive abilities are impaired by Alzheimer’s. Be careful never to make a person with dementia the butt of a practical joke, and keep the level of humor appropriate to their stage. Political humor, for example, will not work well, but humorous mime likely will.

Use Touch to Reinforce Communication. Touch can be as simple as holding one’s hand or lightly touching the forehead with a comforting gesture. It might be a back-rub or involve lightly massaging the hands or feet. As yet there is not much clinical research about the effects of massage and touch on people with Alzheimer’s disease and other forms of dementia, but practitioners report many benefits.

Add scented oil or lotion to massage and get the additional benefit of aromatherapy. 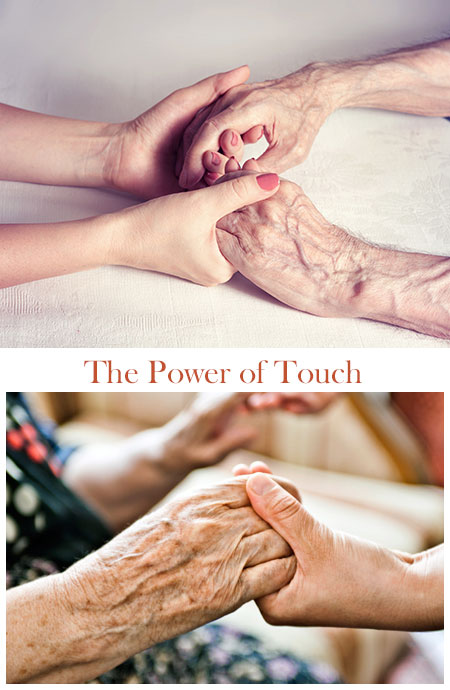 The following is from Massage and Alzheimer’s Disease: What would Maslow say?, an article by Ann Catlin, LMT, NCTMB, OTR:

As a licensed massage therapist and Compassionate Touch practitioner, I have witnessed the transformation that can occur when intentional touch is offered, enhancing quality of life of individuals living with Alzheimer’s disease.
For example:

So what is at the heart of these seemingly magical moments? There is clearly something profound happening that goes well beyond simple touch. We can explore the relationship between human needs and well-being to gain a greater understanding of how deep our touch truly goes.

Realize that non-verbal communication is a significant form of communication, and your loved one with dementia may better understand what you are saying with your body than with your words. If you cross your arms in front of yourself and tell your mother, “It’s a lovely day and we are going to have a lot of fun today,” she will see that you are shutting her out more clearly than she hears you including her.
Avoid or Eliminate Background Noise and other Distractions. Impaired brain function as well as impaired hearing make it difficult to separate background noise from the sound (conversation, music, or whatever) that is important at the moment.

Don’t Be Argumentative. You have entered the universe of Alzheimer’s, and the first rule of that universe is that you will lose all arguments. Arguments are based on the ability to reason.  Reason, along with memory and judgement,  is in the cognitive domain, and is affected fairly early in the progression of many dementias including Alzheimer’s. Arguing with a person who has dementia is akin to reasoning with a person who has lost the ability to reason.  It might be time for a bath or shower. You know that mom hasn’t bathed in three days, but when you mention it she looks right at you and tells you she took a shower just this morning. Your first thought is to remind her that she didn’t, that her last shower was three days ago. No matter how how right you are, no matter how nicely you try to remind her of that fact, you have just started an argument, and…. Well, rule #1.  But that’s not the worst of it; you and everyone involved will end up frustrated, possibly angry, and no one will have gained a thing. If this back-and-forth goes on for more than a couple of minutes, drop it. It is not that important; at least it is not critical. The best thing to do is redirect her attention to something you know she likes to do, and come back to showering later, and with a different perspective.

Give your loved one time to respond. Most dementia affects a person’s ability process speech. When the condition affects the speech centers of the brain the individual will not only have trouble understanding what you say, but it will also take some time to formulate a response. Be patient, and help with words if possible.

Stay in the Moment.

As simple as this sounds, it may be the most difficult of the suggestions on this page, and maybe the most important. It is frustrating to someone who is asked about something in the past if they have no memory of the event. To ask that person about his plans for tomorrow when he has lost the concept of future, or at least his ability to project into the future, is likewise frustrating. As Alzheimer’s disease progresses, a person lives more and more in the present, and it is here that you will effectively communicate with him or with her.

A situation that we commonly see when we visit in Alzheimer’s communities is the well-meaning family member who comes to visit and tries to get a conversation going with a question like, “So what did you have for lunch, dad?” Very often, dad doesn’t remember what he had for lunch, or even that he had lunch. To make matters worse, son or daughter will likely pursue the matter, sure that with enough prompting, dad will eventually recall what it was that he ate a few hours before, and the visit can continue normally. He probably won’t, but he might pretend that he does.
There are probably many reasons for this pattern. “What did you have for lunch?”, “Did you have any visitors this week?” ” Did you get the flowers that Jeff sent you yesterday?” “Did you enjoy the movie last night?” These are questions with which we are comfortable. They are common conversation starters, questions we might ask anyone to “break the ice” or as conversational transitions.
Equally non-productive are conversations that require a person with Alzheimer’s disease to project into the future: “Are you going to watch the movie tonight?”, or, “Are you looking forward to the picnic this weekend?” The inability to plan and to think about future events is a symptom that is common in the mid-stages of progressive cognitive disorders. Unfortunately, looking forward conversationally to events that we are planning is another pattern with which we are all comfortable.
Eliminating the future and the recent past as topics of conversation and as places to “be” with our loved one should not leave us with nothing to do, nothing to say. There is the present. “Now” is where and when the person with a cognitive disorder spends most of his time, the place and time from which experts recommend you communicate; unfortunately, now is a place in which many of us are ill-at-ease. Learn to be with your loved one in the now, and appropriate conversation will follow. The best way to get there is by engaging in something that is both interesting and meaningful. Bring an activity that your loved one will find interesting. Doing puts us firmly in the now.

Use reminiscence to reinforce a sense of identity and self-worth. Using reminiscing as a therapy for dementia may seem to contradict the previous point, but reminiscing takes place in the present. The feelings and emotions that are conjured by remembering things past are being re-experienced now, as is the communication that is guiding and responding to the reminiscences.