When Your Loved One is Hospitalized

As Bernice’s caregiver, friend, and power of attorney, I was responsible for decisions made for her care. I never really considered what would happen when the need for emergency medical care for Alzheimer’s arose. An emergency trip to the hospital can be traumatic for you as the caregiver as well as the person in your care. We don’t wake up in the morning thinking, “today mom is going to fall, and we’ll need to go to the hospital,” but we need to be ready, just in case. After several falls that resulted in trips to the hospital over the last three years, I finally had a system figured out that worked for me.

The caregivers at the community in which Bernice lives were wonderful, and she was happy there. However, each time she made a trip to the hospital, she was been sent off in an ambulance, unescorted. This of course was very upsetting for me because I knew that she would be afraid and unable to relate to the nurses or doctor what happened to her. The assisted living facility simply did not have the staff to be able to send someone with her. And they always seemed to call me after Bernice was on her way to the hospital.

It became my responsibility to get to there as fast as I could.

Our first trip to the hospital was a nightmare. Bernice had lived at her facility for about a month when she fell. She did not seem to be hurt too badly, but to be safe the staff sent her to the hospital to be checked out. It was 9PM on a Thursday when I got to the hospital. Even though they couldn’t find anything wrong with Bernice, because of the hour, they decided to keep her overnight “for observation”. I was told that I could take her home in the morning.

Bernice’s doctor called the next morning. He thought someone from physical therapy should look at her, and that would not happen until later in the day. When they finally did see her, the therapist thought she would benefit from a couple of days of therapy because the nurse told him that Bernice was having trouble walking. They wanted her to stay until Monday.

She was having trouble walking because they had given her Ativan® to calm her down. She had become extremely agitated, a common reaction of memory challenged people in new and difficult situations. Bernice didn’t understand where she was and wanted to leave. Ativan® is often prescribed for these symptoms; unfortunately, side effects of Ativan® can include dizziness, weakness, and unsteadiness. Little wonder it looked to the nurse that Bernice was having trouble walking.

On Saturday, she was agitated once again. She was not interested in staying in bed. After all, nothing was wrong with her. When I arrived at the hospital and found her in restraints, I reached a new level of anger! I immediately removed the restraints from her wrists and found out later that the hospital should have asked permission before they restrained her. The family should have the option of providing a sitter so that restraints are not necessary. Physical restraint can be very traumatic for someone with memory impairment, and such treatment can have legal ramifications, depending on the state.

After I calmed down, I asked how many times she had been to physical therapy that day and was told that they did not provide physical therapy on the weekends. In one of those “this is the last straw” moments I told the doctor on duty that I would be taking her out of the hospital and back to her facility immediately.

As you can imagine, I was not the most popular person in the hospital that day. They wanted me to sign her out A.M.A, Against Medical Advise. I refused. Never do that. If anything happens, Medicare does not have to pay: it becomes your financial responsibility.

It is sometimes easy for a hospital to keep a Medicare or Medicaid patient for extra treatment or extra testing. You don’t get the bill and they get paid. But these extras can result in more discomfort and trauma for the memory- impaired patient.

Bernice Falls Again – This Time it is More Serious 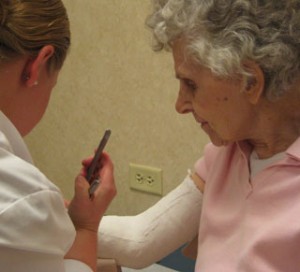 Bernice gets her cast removed – Finally!

Bernice fell and broke her wrist a short time later. I was able to get someone to cover for me at work and off I went to meet her at the hospital. Fortunately she did not need surgery. The doctor put her in a cast from her fingers to her shoulder and told me to take her home. I explained to them that she lives in a Care Community and that I would need a little time to find out whether or not she could go back there. She couldn’t really do anything for herself with the cast on. After several hours, social workers and calls to home care agencies, I had her back at her facility with a private caregiver. She required three months of around-the-clock care.

In August of 2009, Bernice fell again and broke her hip. This time her injury did require surgery – and seven weeks in a rehab facility. From our first experience, I learned that she needs someone with her at all times while in the hospital. While she was getting settled into her room, I called an agency and arranged for overnight care. I didn’t leave the room to make the call until I thought she was sleeping, and by the time I returned, only minutes later, she had pulled her I.V. out! During the day, either I was with her, or her other caregiver was with her.

While she was in the hospital, I arranged for her stay at a rehab facility, one that came to me with a high recommendation. Unfortunately, it turned out to be less than acceptable.

The first day that Bernice was there, they over-medicated her and she slept for 15 hours. Her poor caregiver was frantic, unable to wake her up; she kept calling the nurse to take her pulse and blood pressure. The next day they took her to the dining room for lunch and served her a salami sandwich and steamed zucchini. What 96 year old who has just been released from the hospital, recovering from surgery wants a salami sandwich and steamed, tasteless zucchini? She was so delusional when I saw her at lunch that she didn’t know who I was. I brought her plate to a supervising nurse and asked if she would eat this for lunch. She offered to serve Bernice a fruit plate. By the third day, when they hadn’t even bathed her since she had arrived, I decided to move her.

The second rehab facility turned out to be far superior to the one that was recommended. This move required a “medi-car”, and a whole new environment for her to adjust to. But it was worth it.

If you ever need the services of a rehab facility I recommend visiting at least three, and choose the one that has a memory care unit, the most attentive staff, the best food, the nicest surroundings, the calmest atmosphere, the best activities program, and one that does not necessitate an outside private caregiver. Some of these things are not readily obvious, but ask for a tour, and be sure to spend some time in the wing or on the floor or in the area in which your loved one will be staying.

Things to consider before you have to go into action

And finally in December of 2009, Bernice had another fall. She banged her forehead on a table edge on her way to the floor. She had a nasty contusion, a concussion, and quite the shiner for a couple of weeks. She badly bruised her pelvis, but nothing was broken. She spent four days in the hospital, once again, someone was with her at all times.

By then, we had the procedure down pat. There was still not enough staff where Bernice lived that someone could ride with her on her in the ambulance, but they did make an effort to notify me as soon as possible if Bernice was headed to the hospital. This way I could get to the hospital before she had time to get too frightened, confused, and agitated. Someone, either a hired caregiver or me, was with her at all times for the duration of her stay. This was important not only to keep her safe (from herself), but also to keep her active and stimulated, which kept her happy and made her a much better patient.

So Bernice’s hospital stay went well. Her discharge did not! The hospital social worker had called me to make sure she was arranging for Bernice to be transported to the correct place. I asked her if I should come and get her dressed and be there between 7AM, when her overnight caregiver left, and 10:30AM, when she was to leave the hospital. She told me that there was really nothing I needed to do; they would take care of everything, and it would be better if someone met Bernice at the rehab facility.

I wanted to make sure she was warm enough in the ambulance ride, as it was 15 degrees out, so I had brought warm clothes, a hat, and fleece blankets. I asked the social worker to please make sure that one of the women nurses got her dressed. Bernice would not be comfortable with a male nurse dressing her.

Half an hour after she left the hospital, a nurse called to say that the transport team had forgotten to take her things. I thought that meant the clothes she wore to the hospital; but no, Bernice was sent to the rehab facility in her hospital gown! No one got her dressed. No hat. No warm blankets. I was livid!

Someone needs to be with your loved one at all times; someone you know and trust. Once again, I was not popular with the hospital staff. She spent a week in rehab, but was back at her assisted living facility 2 days before Christmas.