You are here: Home1 / Blog2 / Activities3 / Games that Exercise Memory 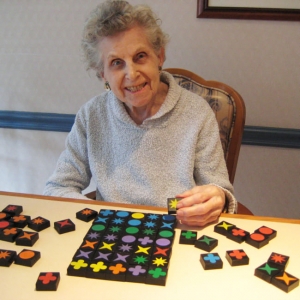 Qwirkle is a strategy game that takes a certain amount of critical thinking. Bernice in this photo is in later stages of Alzheimer’s disease and couldn’t play the game by the rules, but she was able to match the colors and shapes of the game pieces and was pleased with her result. The only important thing here is that she was please with the result.

Game playing strengthens connections in the brain. Whether or not game developers know it, that is exactly what games are designed to do. It is what makes playing games fun. It is the reason children like to play games, the reason the game industry is so successful. Not only does the stimulation provided by appropriate games nurture existing nerve connections, it creates new ones. It is these connections in the brain, the neural pathways, that enable memory and all of the brain’s various functions.

The brain is divided into several parts. Each area specializes in one or several functions. The hippocampus, for example, is tasked with turning experiences into memories. Exercising this part of the brain can improve memory function, if only temporarily. In fact, there is evidence that stimulation to the hippocampus actually causes new brain cells to be created.

That is where game playing comes in. Games, by their very nature, are made to stimulate the brain in some way. Different challenges posed by games stimulate different areas in the brain, and will hopefully boost various brain functions.

What are the best games that exercise memory?

Some games, like chess and checkers, are mostly strategic. Other games are designed to make the player think in different ways. Classic games that require players to think include Scrabble, Monopoly, and even TicTacToe. These games rely on cognitive processes, but also stimulate areas in the brain responsible for memory.

Then there are games that rely heavily on memory. Games like concentration rely on short term memory. How well can you remember something you saw only moments ago if it is now hidden? Trivia games like Trivial Pursuit awaken older memories, what we call long term memories. Both types of games are obvious choices when choosing a game to exercise memory.

Additionally, nostalgia is powerful therapy for people in general, perhaps especially for people with dementia. Trivia games can start a process that can be continued, and will make the game even more effective as a potential tool to improve memory. For example, I found this trivia question online:

Trivia Question: What is the name of the Earth’s largest ocean?

Instead of giving credit for the answer and moving on, ask, “Have you ever swam in the Pacific Ocean? What oceans have you seen? How old were you then? What is your favorite memory involving an ocean?” Etc. This kind of thinking takes the game, and its benefits to the next level.

Here is a link to a fee trivia/reminiscence site I recently became aware of – Memory Lane Games. Let me know what you think of it.

Some games inspire memories simply because they are familiar. Almost everyone has played Checkers. Playing If someone has ever played Checkers, just seeing the game can arouse memories. Other gamXes with the power to do this include Monopoly, Clue, Backgammon, Dominoes, Scrabble,and many familiar card games like Rummy. To add reminiscence (memory) look for games that the person or people in your care recognize and remember.

Games should be challenging but not frustrating

Most types of dementia are progressive; that is, they get worse over time. When choosing a game we first have to consider the stage or severity of the dementia. What can the individual  in question do? What are his or her abilities? A person with Mild Cognitive Impairment might enjoy playing chess, for example. As the disease progresses checkers will be a more appropriate choice. Eventually even checkers will be beyond one’s understanding.

If you see that a game is too difficult and causing frustration, move on to something else, or modify it to be more in line with that person’s abilities. A game that was a lot of fun yesterday might be out of the question today. Conversely, someone might thoroughly enjoy one today that was completely beyond his grasp a week ago. Caring for someone with dementia requires that you be creative and flexible.

Once Checkers becomes too difficult to play by the normal rules of Checkers, create new rules. The checkers can be used to provide stimulation in other ways. Sort the pieces by color. Stack them in alternating colors. Be inventive.

Memory is the symptom we most associate with dementia, but dementia affects many brain functions and processes. The brain is an amazing machine, and brain scientists are only beginning to form an understanding of its workings. What we do know is that different parts of the brain communicate with one another. The brain has many parts but functions as one. Exercise that targets one part of the brain will influence other parts as well.

Health is a viable concern for all seniors

We are hearing more and more about the importance of lifestyle as a way to prevent or at least delay dementia. Since our groundbreaking article (Feb. 2010), many others, including  The U.S Department of Health and Human Services, Harvard School of Public Health, The World Health Organization, as well as a growing number of scholarly articles have taken up the banner. A healthy lifestyle can help you avoid dementia, including Alzheimer’s.

We recommend a post on Porch.com which compiles suggestions from experts in the field, including Best Alzheimer’s Products.  The Best Hobbies for Seniors has a number of suggestion to keep seniors active, healthy and avoiding dementia.

Now, the jury is still out on the actual benefits of game playing and other means of “exercising the brain”. And by jury I mean the scientists that study that sort of thing. Some studies do show improvement in memory and other cognitive processes resulting from the effects of playing games. Other investigators have failed to find such a connection. Don’t be discouraged. There is agreement by many researchers that games, puzzles, sensory stimulation, reminiscing, and a host of other activities have a measurable effect on another, perhaps more important aspect related to dementia and dementia care. Especially as the condition progresses, quality of life is paramount. One can enjoy living in the moment with limited memory, and even with cognitive processes compromised by dementia. Keeping a person engaged is the secret to enhancing quality of life. Appropriate activity, like game playing, is one important key to preserving quality of life. 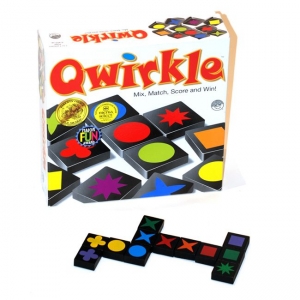 Here is one of our favorite games that exercise memory. Qwirkle was not designed for people with demenita, but it was designed to exercise the brain. 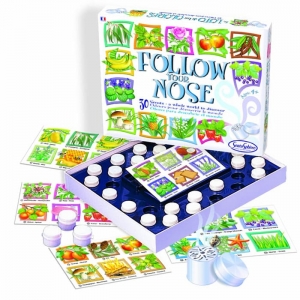 Follow Your Nose is good example of games that exercise memory and many other brain functions as well. It combines sensory stimulation with reminiscence, and the rules can be changed in many ways to adapt it to the abilities of those who are playing.

Best Alzheimer’s Products In The Media