“Among My Souvenirs”: Music Therapy for People with Cognitive Impairment/Dementia

Have you ever wanted an effective and therapeutic Music Therapy Resource that you could use for people with cognitive impairment that stops their behaviours and unlocks their love of music?? 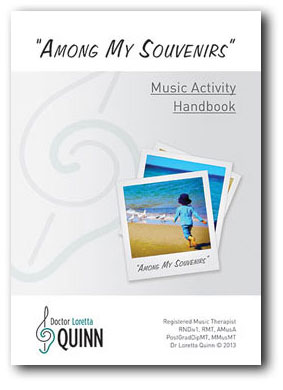 A music activity handbook for music therapy for people with dementia.

Have you ever thought I know music works well for people with dementia but I am not musical??

I HAVE THE ANSWER FOR YOU with Among My Souvenirs Music Activity Pack for People with Dementia, available to purchase from my website .

This resource gives you not only a Planned Music Activity Program, but provides Instructions and Diagrams to make implementing this program as easy and enjoyable as possible.

So what is Music Therapy???

This Music Activity Pack for People with Dementia is a practical example of what Music Therapy is all about, which is………………

The CD Among My Souvenirs: Therapeutic Songs For People With Dementia contains 51 pre-recorded songs in specific musical keys and rhythms to ensure that both men and women with cognitive impairment can sing along to them comfortably and enjoyably!

To find out more about my work, you can view the documentary on my work with people with dementia Forgotten Notes at my website.

Another Music Therapy Technique is Song Writing, which I have used very effectively with carers of people with dementia. I captured their experiences of living with and caring for a Person with Dementia 24/7 and put their experiences to music. I was fortunate, through Carers Victoria (Australia) to receive funding to arrange and record 11 songs which capture the amazing and challenging experiences of these carers. This CD and the lyrics are free and can be downloaded via my website.

I hope you find these Music Therapy Resources as rewarding as I have found them. You will find Among My Souvenirs: Music Activity Pack a valuable purchase for any staff wanting to conduct an effective Music Therapy session with either individuals or groups with dementia. You will be able to use this Planned Activity Program time and time again, with great job satisfaction, witnessing the people with dementia engaging in the music activities.

Dr Loretta Quinn is an accomplished Dementia Professional in the field of Dementia and Aged Care, both as a Registered Music Therapist and a Registered Nurse (Div1). Her passion for Dementia and Aged Care and her diverse knowledge in this area is unsurpassed. Loretta an invaluable asset to the International Aged Care Industry.
~ Sue Leake, Manager, Commonwealth Carers and Respite Centre, Melbourne, Australia, January, 2014.