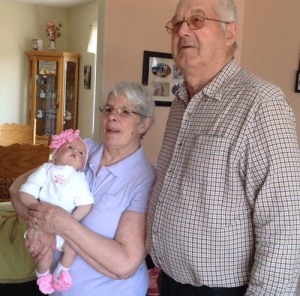 We often get asked, “Is doll therapy really an effective treatment for Alzheimer’s?” The enthusiastic answer is always “Yes!” Doll therapy has always been one of our favorite alternative treatments for Alzheimer’s or another dementia. But there is a qualifier: Doll therapy is not for everyone with dementia. Some people just don’t take to it, but in our experience the vast majority do. And men often benefit from holding and reacting with a doll as well.

Dolls provide many benefits for people with dementia, no matter the cause of the dementia. That benefit might be as subtle as increased attentiveness and focus on the doll. A majority of care providers report a significant positive influence on behavior. However, there are often even more dramatic results. We have seen people who are almost totally unresponsive and uncommunicative become animated and talk, first to the doll, and then to others around her (or him). Several of our customers have reported being able to reduce and even eliminate the drugs prescribed for their loved ones simply by introducing a therapy doll.

Most of the reports on the benefits of using dolls as therapy for people with dementia are anecdotal. On the other hand, there is a growing body of clinical research that supports the almost miraculous results reported by carers of people with dementia. A study designed to examine the impact of doll therapy, published in the journal Nursing Times, concluded: “This study provides support for previous attitudinal studies that have suggested doll therapy is a promising and effective approach to use in the care of older adults with dementia.”

Stuffed animals and some other devices that provide comfort can arouse similar nurturing instincts. This is not quite the same, but can provide an alternative, especially in those few cases in which a doll is not accepted by the individual.

Read more» about the miracle of doll therapy and the supporting evidence at our website.

PRODUCTS FOR DOLL THERAPY FOR ALZHEIMER’S