It is a funny thing about Alzheimer’s that memories are lost in reverse order; memories formed recently are more fleeting than those from many years ago. Understanding this is the basis of Reminiscence Therapy for Alzheimer’s disease. 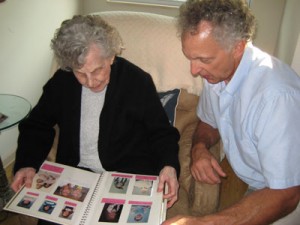 Alzheimer’s disease doesn’t affect memories as much as it effects the process by which an experience becomes a memory. One of the first parts of the brain this disease compromises is the region responsible for creating new memories. That region is the hippocampus. For this reason people even in the early stages of Alzheimer’s may have trouble finding where they left things, what they had for lunch today, or even if they had lunch today.*

In a process that can takes weeks or months, new memories are transferred to other parts of the brain for long term storage. These areas survive until much later in the disease progression. A person with Alzheimer’s disease can have a long conversation about things he or she did in high-school, or a particularly memorable person in the past. This phenomenon is responsible for much of the behavior and the symptoms commonly associated with Alzheimer’s, and we need to consider its effects when communicating with and selecting activities for people affected by the disease.

Access to these older memories will eventually be lost as well. Until then, talking about memories of old will give pleasure and a sense of purpose to someone who is losing the ability to create memories. It is difficult for someone who can no longer remember recent events to hold a conversation about what is happening in his life, or in her life. It is frustrating, and I believe that frustration is at least partially responsible for the anxiety, the aggravation, and even the aggressive behavior that is common with Alzheimer’s disease. Reminiscing can relive that frustration, thereby reducing those symptomatic behaviors.

Family picture albums provide one of the best ways to start reminiscing. But don’t start by pointing to an old photograph and asking, “Remember that summer when we spent weeks at the ocean, dad.” If he doesn’t remember, frustration level rises. Say instead, “This was the summer we rented a beach house in Galveston and spent the summer on the beach.” If he does remember, conversation ensues; if not, find a picture that does the trick.

There are picture books and movies and games that can initiate reminiscing. See the products below to find something that will work for your loved one with dementia.

*This is one of the ways in which Alzheimer’s disease differs significantly from other types of dementia. Some diseases and conditions that cause dementia might not damage the hippocampus, but long-term memories might be lost early. Reminiscence therapy is a wonderful therapy for Alzheimer’s patients, but might not work at all for people with a different dementia.

We have a saying around here: “Make Yesteryear, not Yesterday, the Focus of Conversation”.

Learn more» about the power of reminiscingin our article, “Reminiscence and Alzheimer’s Disease“