Victory may come in the form of prevention rather than cure

Alzheimer’s disease is the only leading cause of death for which there is no cure. There is a growing body of evidence, on the other hand, that we can do certain things to protect against Alzheimer’s. 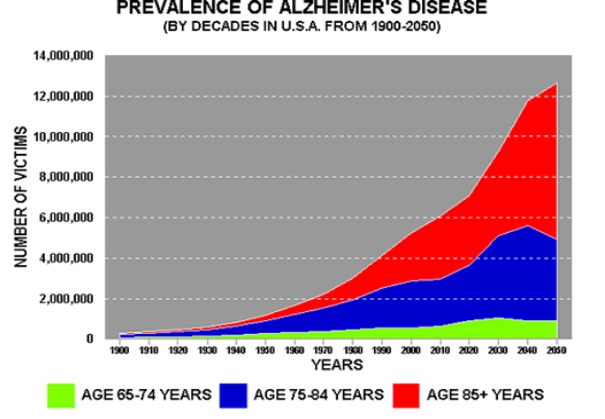 These are just a few of the numbers available from the various organizations and government health institutions that concern themselves with the range of diseases which cause dementia. We could fill a lengthy article with relevant statistics and still only scratch the surface. And these numbers continue to grow at an exponential rate. It is predicted that by the year 2050 there could be as many as 13.8 million people in the U.S. and more than 100 million worldwide! Dementia from all causes is expected to rise proportionately. Unless we find a cure.

So far there is no cure for Alzheimer’s disease, and there is none on the immediate horizon. The same is true for other diseases which cause dementia.

Dementia is not the only condition that has seen a meteoric rise in modern times. Cancers, autoimmune diseases, heart disease, and infectious diseases are all becoming more common. There is a broad range of reasons for this increase, but I am convinced one big one is the way we live. Face it. Things are different than they were even a few decades ago. Modern conveniences do more of our work, leaving us more down time, time to sit and watch TV or “surf” the internet. More time to be inactive. We eat more of our meals out,  often at “restaurants” that aren’t known for discriminately sourcing food. Bad fats, few fruits and vegetables, an overabundance of poorly grown and processed meat are the bill of fare, the most we can expect. Even if we prepare most of our own meals, food is grown differently now. Chemical fertilizers, herbicides, and insecticides boost crop yield, but at what cost. Food additives in prepared and even “fresh” foods increase shelf life, but probably have a reverse effect on the consumer.

While it can be risky to assign a causal relationship to a pair of events merely because the two occur together in time, I do believe there is a growing amount of evidence to support the link between lifestyle and disease. In 2014, Alzheimer’s Disease International published a report entitled Dementia and Risk Reduction: AN ANALYSIS OF PROTECTIVE AND MODIFIABLE FACTORS. The paper is a synopsis of evidence-based clinical findings which explores known and likely risk factors for dementia. We are unable to do anything about some of these factors, like age, gender, and genetics, but others we can change. It is these modifiable risk factors on which we should concentrate.

What you can do to protect against Alzheimer’s

Some risks are considered developmental and early-life factors. These include things like low birth weight, early education and nutrition, as well as socioeconomic and environmental conditions during the formative years. These conditions are not modifiable for anyone approaching the age at which the possibility of dementia becomes a concern, but they are things about which medical science and society as a whole should be very cognizant.

Tobacco use is perhaps the number one risk that can and should be modified. If you smoke, QUIT! That one act will likely improve your health and quality of life more than any other. Globally, smoking is the number one preventable cause of death. Smoking is associated with many cancers, heart disease and stroke, and diabetes. And there is a fairly high correlation between smoking and many types of dementia, including Alzheimer’s disease.

Other possible modifiable factors that put us at risk for dementia:

There are things we can do to decrease our risk of dementia. These protective practices are sometimes called positive risk factors, and can be as simple as sleeping in the right position. A recent study suggests that sleeping on your side is more effective at clearing waste from the brain than is sleeping on your back or stomach. Wastes found to be cleared in this way include the proteins thought to cause Alzheimer’s disease. Other positive risk factors include:

Attention to these lists may be our best chance to protect against Alzheimer’s disease. As with most prevention, the sooner you get started the better. If you smoke, quit now! Start now to modify your diet. Get active. Brisk walking is one of the best exercises, and it doesn’t require a lot of equipment, trainers or club membership. (Always consult your doctor before starting an exercise regime.) One of the conclusions of the Alzheimer’s Disease International report:

An important component of the dementia prevention message is that ‘it is never too late’ to change habits and lifestyles. The NCD prevention strategy focuses upon middle-aged persons, and the prevention of ‘premature mortality’. However, evidence presented in our report suggests that control of diabetes, smoking cessation, and, possibly, increases in physical and cognitive activity, have the potential to reduce the risk of dementia even in late-life.

No, these modifications are not cures, but they may prove eventually to be part of a cure. Furthermore, it is estimated that a five year delay in onset of dementia will decrease incidence by 50%. If healthier lifestyle can bring about such a decrease we are well on our way to eradicating this most devastating of modern diseases.

Read more about things you can do to protect against Alzheimer’s:

More research for “Protect Against Alzheimer’s”