Judi has become something of a celebrity in recent months. She is the first human subject to receive a new, potentially revolutionary treatment for Alzheimer’s disease. The procedure uses focused ultrasound to treat Alzheimer’s disease by opening the blood brain barrier.

This trial, and a series of studies leading up to it, is some the most exciting and promising research I have read since I started writing about Alzheimer’s disease about 12 years ago.

We outlined the problems caused by the blood brain barrier (BBB) in our June 2016 article Leaky Blood Brain Barrier May Be Responsible for Alzheimer’s Disease.

Why Open the Blood Brain Barrier?

The BBB evolved to protect the brain from infection and disease. Blood vessels in the brain are different from vessels in other parts of the body. They are surrounded by a semi-permeable membrane (the blood brain barrier) through which essential nutrients can pass, but which blocks larger molecules including pathogens and toxins that can cause disease and inflammation.

In addition to filtering out bacteria and other large molecules that may cause harm, the BBB blocks most drugs from entering the brain from the bloodstream. This has made it difficult to develop drug treatments for neurological diseases and disorders like Alzheimer’s. Drugs can be administered directly into the brain, but this method is terribly invasive an has dangers of its own.

One way to overcome this is by way of a molecular Trojan Horse.¹  This involves attaching the drug molecule to a “transporter molecule”, one that is very small or fat soluble and able to cross the barrier, and administering this molecule into the bloodstream.  The drug enters the city, so to speak, hidden by the transporter molecule.

A more recent development uses ultrasound to non-invasively “open” the blood brain barrier. Scientists have discovered that “microbubbles” introduced into the bloodstream, when activated by focused ultrasound, opens the BBB so that larger molecules, like drugs, are allowed to pass from the bloodstream into the brain. A 2006 study² successfully transported an anti-cancer agent Herceptin into the brains of mice using microbubbles and ultrasound to “open” the blood brain barrier.

Essentially, ultrasound causes the microbubbles to shimmy which enlarges the openings in the barrier allowing larger particles through. This mechanical process by which the BBB is opened is both transient and reversible.

The authors suggested that this ultrasound procedure might eventually be used treat Alzheimer’s disease.

In 2010 researchers at Sunnybrook Research Institute in Toronto successfully delivered anti-Abeta (amyloid-beta peptide or Aβ) antibodies to the brains of transgenic mice. Not only did the delivery system work (the antibodies entered the brain through the BBB), but within four days of treatment Aβ pathology was significantly reduced.

The ultrasound procedures use magnetic resonance imaging technology to focus ultrasound to a specific target; for example, the hippocampus.

The reasons that medical researchers use animals (usually mice) in preliminary trials is obvious. The deficiency of this model is that results don’t always translate well to human subjects. Using focused ultrasound to open the blood brain barrier is essentially a mechanical process, so we might expect the effect to translate well to human trials.

In early 2015 Scientists at Sunnybrook Research Institute became the first to successfully open the BBB in a targeted area in the brain of human subjects using the ultrasound procedure. Test subjects were five patients with mild to moderate Alzheimer’s disease. In all cases “the blood–brain barrier within the target volume was safely, reversibly, and repeatedly opened.”  This phase I trial, reported in the journal Nature4, was designed only to test the procedure and safety; no drugs were administered. No significant adverse effects were experienced by any of the five subjects in this phase.

The hippocampus is responsible for creating memories and for spatial orientation. It is the part of the brain first affected by Alzheimer’s disease.

The success of Phase I trial opened the way for Phase II. The Institute reported in January of this year that they were able to open the BBB in multiple regions of the brain in Alzheimer’s patients. Using MRI guided ultrasound researchers at Sunnybrook targeted areas including the hippocampus and parietal lobes, areas affected by AD. Phase II is ongoing and will involve 30 participants with Alzheimer’s disease.

Phase I and II were proof-of-concept. Scientists wished to determine if the blood brain barrier could be safely and repeatedly opened using ultrasound. If the procedure proves to be valid, and so far it has, the next step will be to administer drugs to targeted areas of the brain through the opened BBB.

However, somewhere along the way someone noticed that the ultrasound procedure itself had a positive effect related to Alzheimer’s.

BE A PART OF THE SOLUTION

Find out if you may be eligible to participate in Phase II trials. https://sunnybrook.ca/content/?page=focused-ultrasound-clinical-trials-form

Drugs May Prove Unnecessary When Using Ultrasound to Treat Alzheimer’s

About the time scientists at Sunnybrook were opening the BBB in human subjects, a group at the Queensland Brain Institute, The University of Queensland, treated transgenic mice using a similar ultrasound treatment. The study5, reported in the journal Science, reported measurable and significant reductions in the amount of plaques in 75% of mice Following the procedure, in which no pharmacological agents were used, the mice demonstrated improvement on three memory tasks. 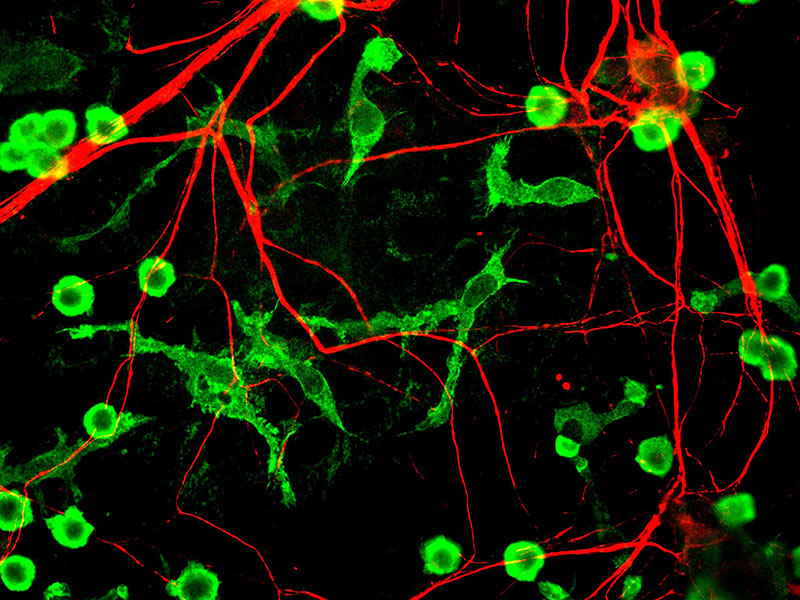 “Mixed rat brain cultures stained for coronin 1a, found in microglia here in green, and alpha-internexin, in red, found in neuronal processes. Antibodies and image generated by EnCor Biotechnology Inc.” by Gerry Shaw is licensed under the Creative Commons Attribution-Share Alike 3.0 Unported license.

The mechanism at work here involves the body’s own immune system and that system’s representative in the brain; microglia. Microglia are the nervous system’s garbage collectors, cleaning out debris and dead cells, and helping to control inflammation. Read FLASHING LIGHT THERAPY FOR ALZHEIMER’S DISEASE for a more thorough account of microglia and how they work to keep our brain healthy.

Microglia in the Alzheimer’s brain become inactive. In fact, inactive microglia could be considered another hallmark of Alzheimer’s disease. This dormancy is at least a part of the reason that the plaques and tangles accumulate leading to neuron atrophy and dementia. Like a light flashing at 40 Hz, Ultrasound directed at the brain invigorates microglia. Active microglia essentially dissolve and absorb those plaques and tangles.

Now back to Judi, age 61, who had worked as a neonatal nurse until memory problems caused by younger onset Alzheimer’s disease made it impossible to continue. She volunteered to be the first subject in a study at the Rockefeller Neuroscience Institute at West Virginia University. The trial6,7, spearheaded by Dr. Ali Rezai, targeted Judi’s hippocampus with focused ultrasound using similar technology as that used at Sunnybrook, Queensland, and other centers.

Judi was administered the ultrasound procedure on October 16 and October 30, 2018. In an interview8 with CBS affiliate KDKA, Pittsburg, Judi said, ““I really had significant improvement in cognitive memory that was pretty impressive.” This after 3 treatments. She will be followed for 5 years to access the effects of the treatment.

AN EVEN LESS INVASIVE TREATMENT

The results researchers are achieving with focused ultrasound are very similar to those we reported on in FLASHING LIGHT THERAPY FOR ALZHEIMER’S DISEASE last year. Light flashing at 40 Hertz activates brain waves which stimulates microglia to clear the brain of amyloid plaques and fibrillary tangles.

Using another ultrasound technology, low-intensity pulsed ultrasound (LIPUS) to the whole brain, researchers at Tohoku University in Japan report similar microglial arousal in AD mice, with the concomitant cognitive improvement. This team also tested LIPUS on mice modeled for vascular dementia and found cognitive improvement in this group as well.

In a paper9 published in Brain Stimulation the Japanese group led by cardiologist Hiroaki Shimokawa report increased blood flow in the brain. This suggested to them that LIPUS is responsible for blood vessel formation. Furthermore, there is evidence that their whole brain procedure promotes formation of new white matter in the brain. This finding indicates that LIPUS may be a potential treatment for other neurological disorders.

6Rezai, A. (2018). Battling Alzheimer’s through Better Access to the Brain. Scientific American.

Science moves forward in baby steps. An new hypothesis is formed, usually based on observation, or on previous related hypotheses. The hypothesis is tested by devising some sort of experiment. If the experiment is successful, that is, if it yields the expected results, then some credence is attributed to the original hypothesis.

One successful experiment does not prove a hypothesis; that type of proof is generally reserved for the domain of mathematics.

Science also advances when experiments present unexpected, even contrary results. If enough experimental evidence contradicts the original hypothesis, it’s back to the hypothesizing board – but that is important to science’s progression too.

Serious studies are usually published in professional journals for peer review. In fact, that is an almost necessary component of science. One important aspect of experimental design is that the experiment is able to be replicated. Other scientists can follow the design parameters to test the hypothesis. The more often a study is done with similar results, the stronger and more viable the original hypothesis becomes. Without corroboration by others the hypothesis fails.

I have not seen a formal hypothesis that is driving these studies. It would probably be something like: Ultrasound directed at the brain can (do something in the brain) and combat the effects of (Alzheimer’s, tremors, vascular dementia, etc.), and do so safely,  by  (exciting microglia, repairing neurons, forming new blood vessels, etc.).

So far, I have related a fair amount of evidence to support ultrasound as a valid treatment for Alzheimer’s disease and other neurological conditions. I haven’t seen anything to contradict my hypothetical hypothesis. Much more needs to be done, naturally. That’s how rigorous science works. But I think this is a line of research to follow.